Perfect Filesystem for NAS? – What filesystem should i use?

there are at least 3 distros i know of (Fedora/RedHat/CentOS, SuSE/OpenSuse and Trisquel (yes Richard Stallman himself runs xfs!)) using xfs as their default filesystem.

„Red Hat Enterprise Linux 7 began defaulting to an XFS file-system rather than EXT4 and it looks like they are continuing to invest in XFS and make continued use of it into the future, which isn’t too surprise considering they have been employing some XFS developers.“ (src: phoronix.com)

Stratis is a Linux local storage management tool that aims to enable easy use of advanced storage features such as thin provisioning, snapshots, and pool-based management and monitoring.

After two years of development, Stratis 1.0 has stabilized its on-disk metadata format and command-line interface, and is ready for more widespread testing and evaluation by potential users. Stratis is implemented as a daemon –

– as well as a command-line configuration tool called stratis, and works with Linux kernel versions 4.14 and up.

„XFS is awesome for home folders. XFS has great multi-thread performance and more consistent performance as it fills up.“ (src)

While XFS has proven to be a pretty good, fast filesystem (so far i love it, it is really responsive) and development effort is going into it – i still would recommend the much slower ext3 (unless you want your NAS to be a webserver (not recommended! DEDICATE IT TO BACKU PURPOSES ONLY!)) with regular automated filesystem checks (reboot every weekend sa/su at 00:00) until 2030, why?

( NFSv3, ext3, and XFS filesystems all have problems resulting from their use of 32-bit timestamps)

ext3 advantage over ext4: extundelete does not undelete well under ext4 – under ext3 it does 😀

(which is RAID1 on „steroids“ (double, tripple the speed) and are seen as one big drive by the OS.)

I think no matter in business or in private scenarios, RAID1 (3x HDs mirrored disks holding the same data) + EXT3 (linux mdadm software can do that and works reliable) should be used in combination with a simple, reliable filesystem like ext3 and regular automatic filesystem checks.

So if one disk fails – you still have two disks holding the same data – so you are not in a hurry to replace the broken disk – it can take up to 1-3 days to sync a raid1 of 2TB disks.

In addition to this i would recommend backing your stuff up automatically via internet. But this is a different difficult topic which should be possible with rsync which is capable of transfering deltas even of larger files. (instead of re-transmitting the whole file, it transmits only the bits that have changed).

MY RECOMMENDATION: WHO CARES IF THE NAS IS DOING A AUTOMATIC REBOOT AT SUNDAY 3 o’CLOCK IN THE MORNING AND CHECKING 2-3TB OF EXT3 FILESYSTEM? NO ONE!

SO WHO CARES ABOUT THE FILESYSTEM CHECK DELAY ON BOOT, IF IN RETURN, YOU WILL HAVE A RELIABLE FILESYSTEM.

RELIABILITY SHOULD BE THE TOP1 PRIORITY OF ANY FILESYSTEM.

MAYBE SPEED CAN BE SECOND, UNLESS YOU DO NOT CARE ABOUT DATA-LOSS. (temporary storage… but believe me… even a temporary storage contains important files that users feel very angry about if lost)

So what you SHOULD do is let your filesystem (no matter what system) be checked automatically and monthly/weekly.

„Home users can relax though. Home RAID is a bad idea: you are much better off with frequent disk-to-disk backups and an online backup like CrashPlan or Backblaze.“

i say… yes: Windows 7 in-build RAID1 functionality… failed me once (Win 7 Ultimate) but runs well on another machine.

The nasty thing: If it goes out of sync… it will not even notify you about that thing.

If the Win7-Software-Raid1 fails… it might be tricky to get it back working.

Zettabyte File System – this is what oracle-datacenters use, was donated by Oracle to the linux project.

It is a 128Bit filesystem developed by Jeff Bonwick

It is more than just a file system – it includes functionality of a logical volume manage (lvm2), software-RAID capabilities and copy-on-write.

ZFS accroding to this site is even +10% faster than hardware-RAID.

Oracle is using it on their Solaris OS which again runs on Sun’s SPARC systems.

So from database to hardware to filesystems – Sun and Oracle do it all.

I have no hands-on-experience with ZFS, but it seems to be a new concept, that is aiming at datacenter’s and datacenters only 😀

You will need at least 2GB of RAM to run it properly… otherwise it might CRASH!? A SSD is recommended as it seems to do „hybrid-drive“ stuff (combining RAM, SSD and SATA to one big drive… using RAM and SSD for caching and SATA for storage…  )

You should have „real“ professional server hardware (EEC RAM) if you use ZFS:

„#1 Yes you should be using ECC ram for using ZFS.. It’s in all the literature.. You do risk your whole pool if you have corruption without ECC..

QNAP NAS are „prosumer“ devices that have no EEC-RAM, so ZFS is not an option here. (it uses ext4 as default)

XFS is a high performance journaling filesystem which originated on the SGI IRIX platform.

It is completely multi-threaded, can support large files and large filesystems, extended attributes,
variable block sizes, is extent based, and makes extensive use of Btrees (directories, extents, free space) to aid both performance and scalability.

Refer to the documentation at http://oss.sgi.com/projects/xfs/

comment by a reader: „UPS, battery-backed data caching, none of it matters. If you run XFS, it will burn you sooner or later. I have had 4 XFS systems in the last 2 years, every…single…one of them has failed.“

XFS was contributed to the Linux kernel by SGI and is one of the best filesystems for working with large volumes and large files.

XFS uses more RAM than other filesystems, but if you need to work with large files its performance there is well worth the penalty in memory usage.

XFS is not particularly ill-suited for desktop or laptop use, but really shines on a server that handles medium to large size files all day long. Like ext3, XFS is a fully journaled filesystem.

I have heard that using XFS is a good way to f*** up your system if the power goes out while it is doing stuff.

interesting that with xfs maximum amount of writable bytes vary – while the amount of storable bytes of the other filesystems stays constant – could this be due to xfs large write cache – which also means – only use it with a USV that properly shuts down your server in case of an power outage!!!.

Centos7 is using it for root as well as /home data partition.

while ext3 is STILL (in 2018) a very reliable filesystem, this „feature“ makes me worry: Near-time Extinction due to Date-Stamp Limitation – This „Geek’s Millenium“ is expected to cause widespread disruption if not dealt with in a timely fashion. Ext3 stores dates as Unix time using four bytes in the file header. 32 bits does not give enough scope to continue processing files beyond January 18, 2038.[43]

Here’s an animation showing how the Year 2038 bug would reset the date – so i guess you should migrate to ext4 or BTRFS after 2030.

ext3 is the younger cousin of ext2.

It was designed to replace ext2 in most situations and shares much the same code-base, but adds journaling support.

In fact, ext3 and ext2 are so much alike that it is possible to convert one to the other on the fly without lose of data.

ext3 enjoys a lot of popularity for these reasons.

There are many tools available for recovering data from this filesystem in the event of catastrophic hardware failure as well.

ext3 is a good general purpose filesystem with journaling support, but fails to perform as well as other journaling filesystems in specific cases.

One pitfall to ext3 is that the filesystem must still go through this exhaustive check every so often.

This is done when the filesystem is mounted, usually when the computer is booted, and causes an annoying delay.

MY RECOMMENDATION: WHO CARES IF THE NAS IS DOING A AUTOMATIC REBOOT AT SUNDAY 3 o’CLOCK IN THE MORNING AND CHECKING 2-3TB OF EXT3 FILESYSTEM? NO ONE!

SO WHO CARES ABOUT THE FILESYSTEM CHECK DELAY ON BOOT, IF IN RETURN, YOU WILL HAVE A RELIABLE FILESYSTEM.

RELIABILITY SHOULD BE THE TOP1 PRIORITY OF ANY FILESYSTEM.

MAYBE SPEED CAN BE SECOND, UNLESS YOU DO NOT CARE ABOUT DATA-LOSS. (temporary storage… but believe me… even a temporary storage contains important files that users feel very angry about if lost)

So what you SHOULD do is let your filesystem (no matter what system) be checked automatically and monthly/weekly.

or better: every time on boot by

i never had any major issues with ext3. so stick with it 🙂

size limit to files and filesystem?

„Ext3 has some limits on max disk size, due to the chosen block size. With a block size of 4KiB the maximum file size is 2TiB and the max disk size 16TiB.“ (src)

coolness: You can grow partitions „on the fly“ with ext3 and gparted

i would never the less recommend: 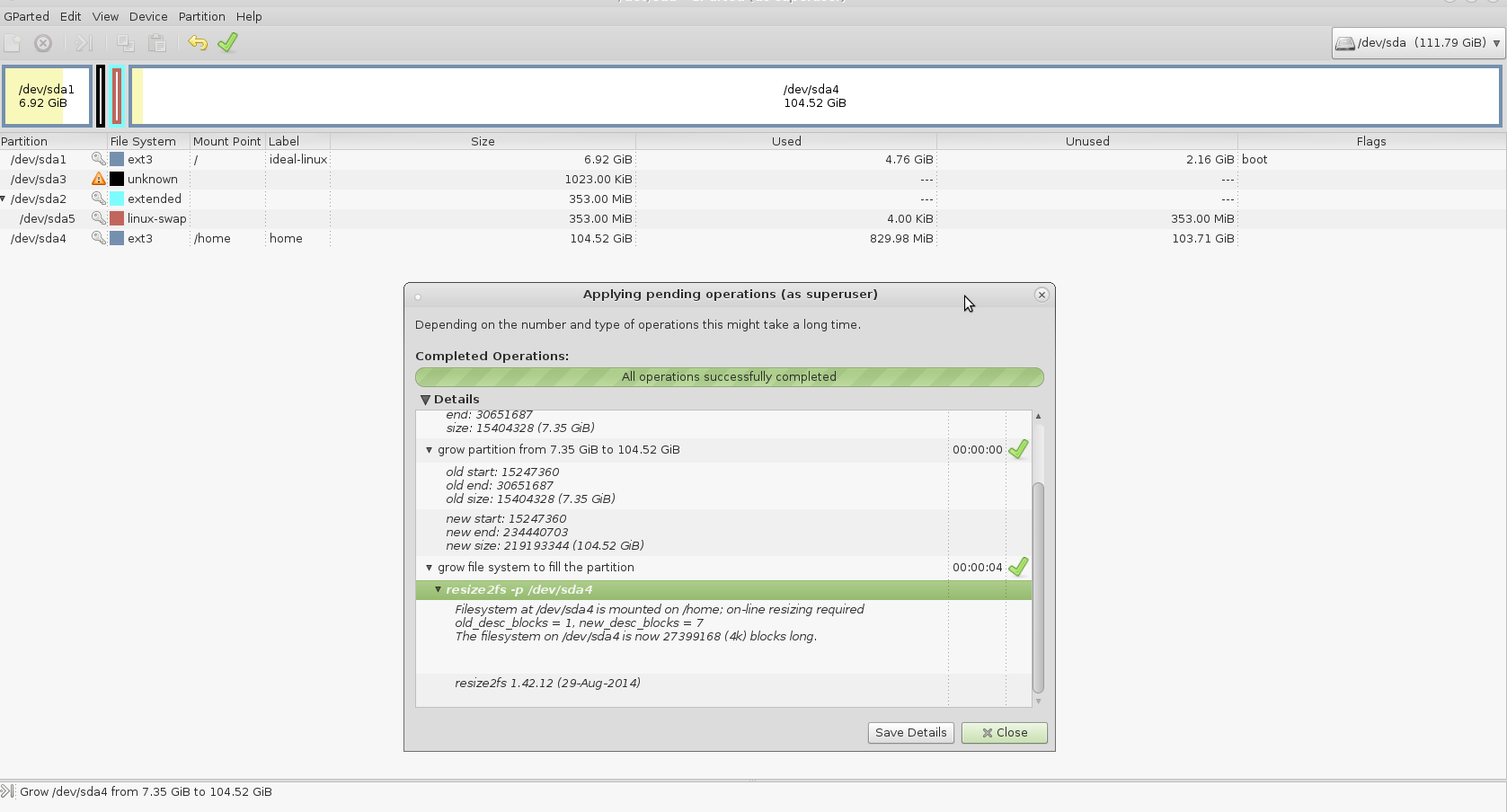 ext4 is the latest in the ext series of filesystems.

It was designed to build upon ext3 with new ideas on what filesystems should do.

While Slackware supports ext4, you should remember that this filesystem is still very new (particularly in file system terms) and is under heavy development.

If you require stability over performance, you may wish to use a different filesystem such as ext3.

With that said, ext4 does boast some major improvements over ext3 in the performance arena, but many people don’t yet trust it for stable use.

reiserfs is one of the oldest journaling filesystems for the Linux kernel and has been supported by Slackware for many years.

It is a very fast filesystem particularly well suited for storing, retrieving, and writing lots of small files.

Unfortunately there are few tools for recovering data should you experience a drive failure, and reiserfs partitions experience corruption more often than ext3.

JFS was contributed to the Linux kernel by IBM and is well known for its responsiveness even under extreme conditions.

JFS’s long history and thorough testing make it one of the most reliable journaling filesystems available for Linux.

Btrfs is a new copy on write filesystem for Linux aimed at implementing advanced features while focusing on fault tolerance, repair and easy administration.

SUSE12 is using it on /root partition where it creates daily read-only-snapshots of your operating system.

For data partition they use xfs:

F2FS is a new filesystem for Linux aimed at NAND flash memory-based storage devices, such as SSD, eMMC, and SD cards. It is based on Log-structured File System (LFS).

should i raid1 my swap as well?

1x RAID holds NOT-replacable data (that is also backed up once a week and swaped for another USB-drive that you then carry home, so you ALWAYS should have one complete data set backup OUTSIDE of office/business)

advantage of this combination of SSD + RAID = SPEED! 🙂

changes with use-case and filesystem-version… keep an eye on:

https://openbenchmarking.org/s/File-System <- a lot of data but not well structured… confusing.

What’s the Best File System for My Linux Install?