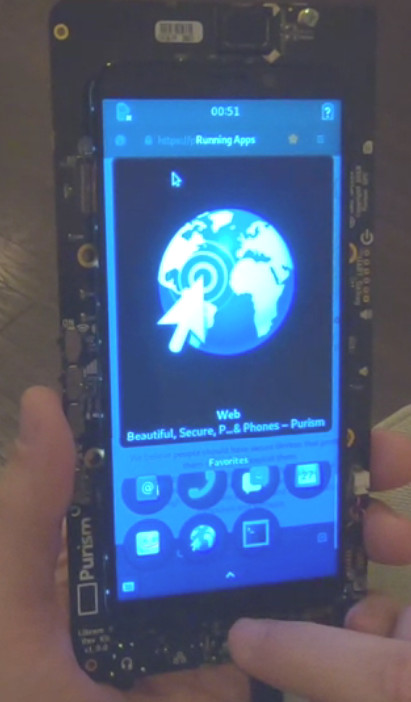 Progress has been quick and steady, and because we only use components that respect both our ethical values and your personal privacy and freedoms, you can imagine the layers of complexity that go into delivering such a revolutionary mobile phone – from new hardware to a new kernel, from a new operating system to new applications, all of it culminating into the Librem 5 phone.

We want you to have the best possible solutions when it comes both to hardware, and to user experience.
Being able to show that what we’re doing corresponds to our exact intentions is very important, for it will allow you to see this progress for yourself–and we do think the video below, running on the Librem 5 dev kit hardware we shipped in December, speaks volumes.

“What you just saw in the video is the prototype of the Librem 5 hardware, and it has nearly identical specs to the ones we are putting into production later this year.

And, as you can see, it is running our own PureOS mobile operating system – we’re proud to show off the fact that the Librem 5 is not built on Android, nor iOS.

All the basic functionality is still in pre-release state, and more progress is constantly happening around-the-clock, which means even more apps are making it into the PureOS Store regularly.

But all this leads us to the aforementioned (one quarter) shipping adjustment: the previous Q2 estimate is now confirmed for Q3 product shipping:

This accounts for the time it took us to properly benchmark test the newest CPU choices from NXP for the Librem 5, and the question of whether or not to choose the i.MX 8M Quad or the i.MX 8M Mini, mean we have adjusted our delivery plans slightly.

As we previously announced, the i.MX 8M Quad CPU had known errata issues in the silicon itself, and this was the root cause for the delay, detour and need for research about potential alternatives.

On one hand, the i.MX 8M Quad silicon issues meant not only that the temperature of the battery was way too high, but also that it could discharge too quickly. On the other hand, the i.MX 8M Mini is made in an updated silicon process (14nm instead of 28nm) and has reduced features, resulting in a lower power consumption–but it’s new, and there could be unknown issues and risks. So a lot of research was made, and our development team started evaluating the i.MXM8 Mini to see if it could be used within our requirements–free software only, no binary blobs, mainline based software stacks.

And then the month of February began, and something else unexpectedly happened: NXP released a new software stack for our first CPU choice, the i.MX 8M–and all of the power consumption and heating issues suddenly disappeared!

So here we are, on track again after a little delay–quite a useful delay, because now we know. We know a lot more about the i.MX 8M Quad CPU we chose, and a little bit more about a possible alternative. We have chosen the i.MX 8M Quad CPU because the power consumption issues can be dealt with in software… and ultimately that means we don’t have to change the hardware to solve this issue. Full fabrication will begin for the Librem 5 with the specifications we described before:

Delivering on our Promise

As you have come to know, Purism will always keep you posted – about the impressive progress we are making, about any issues, major or minor, that come along. And ultimately, this CPU choice has many opportunities – ones that will change the future of computing for the better, for this decision does come with certain advantages in the long term. The i.MX8M Quad is the most powerful CPU that has both a good operating temperature and a good battery life. Having chosen the best possible CPU will provide us, and you, with an overall better hardware experience, with better capabilities and a shorter integration path–meaning, the integration with the software platform.

Software development continues to move forward quickly. Amazingly quickly. In the past few months, we’ve seen astonishing software progress, and we are now able to take advantage of it. Finally, the extra time for Librem 5 hardware fabrication will benefit software advancements that continue without slowdown, such as quality testing, providing a greater number of default apps, and community advancements made on our Librem 5 dev kit.

We recognize the importance of the Librem 5 phone and all the interest you have around it, you can rest assured. Based on our historic delivery on our promises, we feel more comfortable in advancing towards the delivery of the Librem 5 phone in the third quarter of 2019. We are also immensely grateful for all the support we’ve been receiving, both on our forums and on social media, and so proud of the progress our team is making; grateful to our community for supporting our efforts as we work diligently to get the Librem 5—and all its societal benefits—into people’s hands. We think that both our team and the community deserve the very best.