Tim Berners-Lee: “control of information is hugely powerful” “let’s see if the USA can act upon it’s values”

The “network contract” (Contract for the Web https://contractfortheweb.org) requires governments, companies and individuals to make specific commitments to protect the network from abuse and ensure its benefits to humanity.
The Creator of the world wide web presented the principles of the “Network contract” (https://www.securitylab.ru/news/502850.php)

SecurityLab, [26.11.19 08:14]
The non-profit organization RIPE NCC, responsible for the distribution and registration of IP addresses in 76 countries in Europe, the Middle East and some regions of Central Asia, distributed the last block of IPv4 addresses.

The announcement of the end of available IPv4 addresses increased pressure on network operators and raised the issue of Internet scalability.

Europe has run out of available IPv4 addresses (https://www.securitylab.ru/news/502851.php)

SecurityLab, [26.11.19 08:34]
A certain cybercrime group conducts a massive scan of the Internet on the basis of Docker-systems with APIs available on the Network.

The malware campaign began on November 24 and immediately became visible because of its scale.

Owners of iOS devices do not seem to be affected by the problem.

It took the company more than 10 months to fix the problem.

On Monday, November 25, the court of Fort Lauderdale (Florida, USA) sentenced a Chinese citizen to eight months in prison and two years probation for trespassing and perjury.

Chinese woman who tried to smuggle suspicious flash drive into trump residence will be released (https://www.securitylab.ru/news/502860.php)

As part of the joint fight against cheating in the gaming industry, Kaspersky Lab and MY company.GAMES presented the results of the study “security Risks when using cheats in online games”.

On the example of the game Warface (free to play/kill virtual people, just as Fortnite) (MICROSOFT KEEPS SHOVING DOWN VIOLENCE YOUR CHILDRENS THROATS! FOR FREE 🙂 THANK YOU MICROSOFT! FOR BRUTALIZING MANKIND! IF ITS FREE! YOU (YOUR DATA) IS THE PRODUCT!), experts analyzed the prevalence of threats among the cheating software available on the Internet.

Almost half of the cheats for online games threaten the safety of users (https://www.securitylab.ru/news/502863.php)

It company Virtual Care Provider (VCP) from Wisconsin (USA), providing cloud data hosting, security and access control to more than 100 nursing homes in the United States, was the victim of ransomware Ryuk.

More than 100 nursing homes in the US have been victims of ransomware by Ryuk (https://www.securitylab.ru/news/502884.php)

Facebook has unveiled a new app, Viewpoints, that allows users to receive rewards for participating in research.
Facebook will pay users for their data (https://www.securitylab.ru/news/502885.php)

Security researchers at TrendMicro have found thousands of Android apps exposed to a vulnerability (CVE-2019-11932) that Facebook previously fixed in the WhatsApp messenger.

A double free vulnerability in the DDGifSlurp function in decoding.c in the android-gif-drawable library before version 1.2.18, as used in WhatsApp for Android before version 2.19.244 and many other Android applications, allows remote attackers to execute arbitrary code or cause a denial of service when the library is used to parse a specially crafted GIF image.

In the next version of Firefox, the digital fingerprint lock feature may be enabled by default.

Firefox may have a default digital fingerprint lock feature (https://www.securitylab.ru/news/502888.php)

“results show that the overwhelming majority of Internet users could be uniquely fingerprinted and tracked using only the configuration and version information that their browsers make available to websites” (src: eff.org) 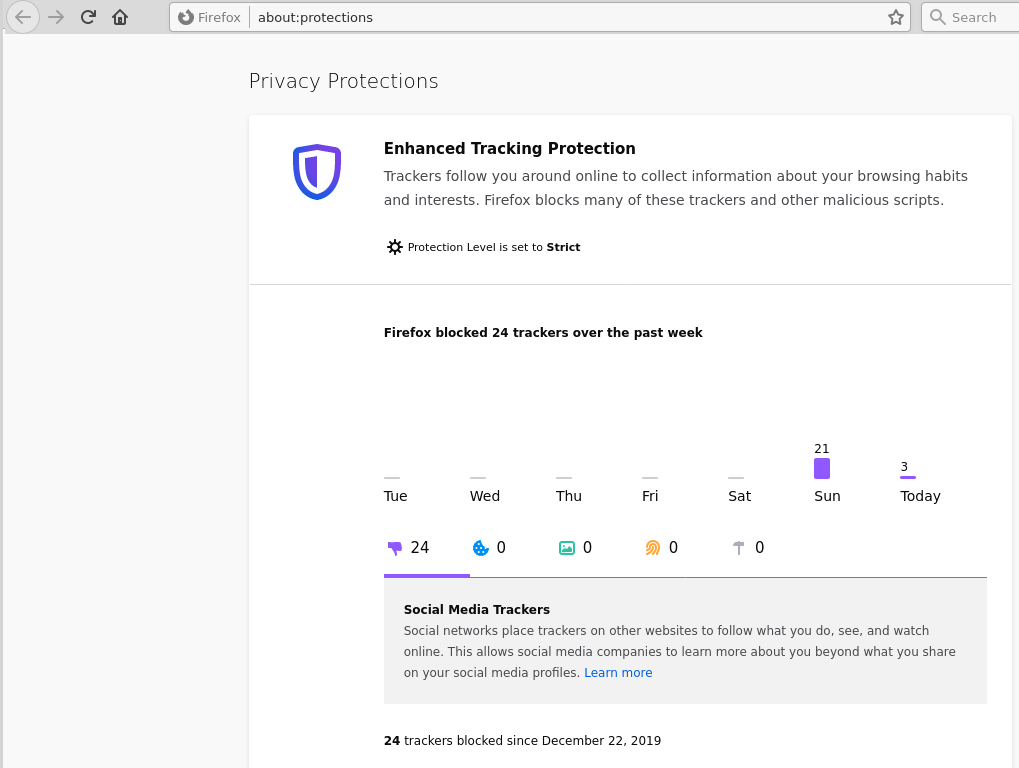 “To combat these threats, we are pleased to announce new protections against fingerprinters and cryptominers. In collaboration with Disconnect, we have compiled lists of domains that serve fingerprinting and cryptomining scripts. Now in the latest Firefox Nightly and Beta versions, we give users the option to block both kinds of scripts as part of our Content Blocking suite of protections.” src: https://blog.mozilla.org/futurereleases/2019/04/09/protections-against-fingerprinting-and-cryptocurrency-mining-available-in-firefox-nightly-and-beta/

Hewlett Packard Enterprise (HPE) has warned users of its SAS SSDS to install an important update.

SAS SSD stops working, and it is impossible to restore it or the data stored on it, warns HPE.

Their operation allows you to delete files and cause a denial of service.

The administration of the social network Twitter sent an email to all owners of inactive accounts with a warning about the need to log in to the account before December 11.

Otherwise, it will be deleted and the username will be free.

Emails are sent to all users who have not logged into your account for six months or more.

Twitter users are waiting for mass deletion of accounts (https://www.securitylab.ru/news/502895.php)

The document is created to promote the cybersecurity of these vehicles by identifying emerging threats and issuing guidance on potential security measures that can eliminate them.

ENISA published a report on the cybersecurity of “smart” cars (https://www.securitylab.ru/news/502896.php)

This is reported in the report of the security and information Service of the Czech Republic (Bezpečnostní informační služba, BIS) for 2018, published on Tuesday, December 26.

Experts from Microsoft warned about the attacks of the cryptocurrency miner Dexphot, which managed to infect more than 80 thousand computers around the world.

According to experts, the main feature of Dexphot is the use of complex techniques to evade detection.

Researchers from the company Confiant published a report “Demand Quality Report for Q3 2019”, dedicated to the analysis of malicious advertising.

Almost 60% of all malicious advertising is distributed by 3 ad networks (https://www.securitylab.ru/news/502921.php)

South Korea’s largest cryptocurrency exchange Upbit has notified its users of the theft of tens of millions of dollars in cryptocurrency from its wallet.

The Federal Communications Commission (FCC) of the United States unanimously voted to prohibit U.S. telecommunications providers to use government subsidies to buy equipment from Huawei or ZTE.

The FCC also proposed to withdraw from companies receiving government subsidies any equipment from Huawei and ZTE that they already have, according to Reuters news Agency.

The US has banned broadcasters from buying equipment from Huawei and ZTE (https://www.securitylab.ru/news/502848.php)

The MaxPatrol SIEM incident detection system is loaded with an expertise package [1] to detect attacks on Linux operating systems [2].

It helps to detect suspicious network activity of applications and accounts, which will prevent the development of an attack.