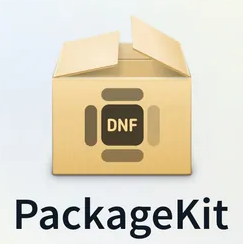 DNF is the next generation of package management for redhat based operating systems. Currently, it exists as a fork of yum 3.4 that use libsolv as its dependency solver. It is currently in use by the Fedora distribution.

DNF or “Dandified YUM“[2][3][4] is the next-generation version of the Yellowdog Updater, Modified (yum), a package manager for .rpm-based distributions.

Perceived deficiencies of yum (which DNF is intended to address) include poor performance, high memory usage, and the slowness of its iterative dependency resolution.[8] DNF uses libsolv, an external dependency resolver.[8]

DNF was originally written in Python, but as of 2016 efforts are under way to port it to C and move most functionality from Python code into the new libdnf library.[9] libdnf is already used by PackageKit, a Linux distribution-agnostic package system abstraction library, even though the library does not have most of DNF’s features.[10]